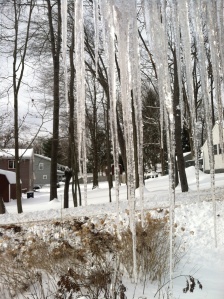 all the singing is in
the tops of the trees
where the wind-bird
with its white eyes
shoves and pushes
among the branches.
Like any of us
he wants to go to sleep,
but he’s restless—
he has an idea,
and slowly it unfolds
from under his beating wings
as long as he stays awake.
But his big, round music, after all,
is too breathy to last.
So, it’s over.
In the pine-crown
he makes his nest,
he’s done all he can.
I don’t know the name of this bird,
I only imagine his glittering beak
tucked in a white wing
while the clouds—
which he has summoned
from the north—
which he has taught
to be mild, and silent—
thicken, and begin to fall
into the world below
like stars, or the feathers
of some unimaginable bird
that loves us,
that is asleep now, and silent—
that has turned itself
into snow.
Mary Oliver

Spring is coming. The light is changing and the days are slowly lengthening. Stay warm as this cold descends upon us again and remember it will soon be spring! Make a delightful soup or stew to stay warm and feed your whole being. This is a real comfort food soup and so easy to make.

In a medium saucepan, fry the leeks until they are tender.

Combine water, shoyu, ginger, cardomon in pot with leeks and bring to a boil.

Once boiling, bring to a simmer for approximately 15 minutes.

Add buckwheat soba noodles and cook until noodles are tender – about 5-7 minutes.

This site uses Akismet to reduce spam. Learn how your comment data is processed.